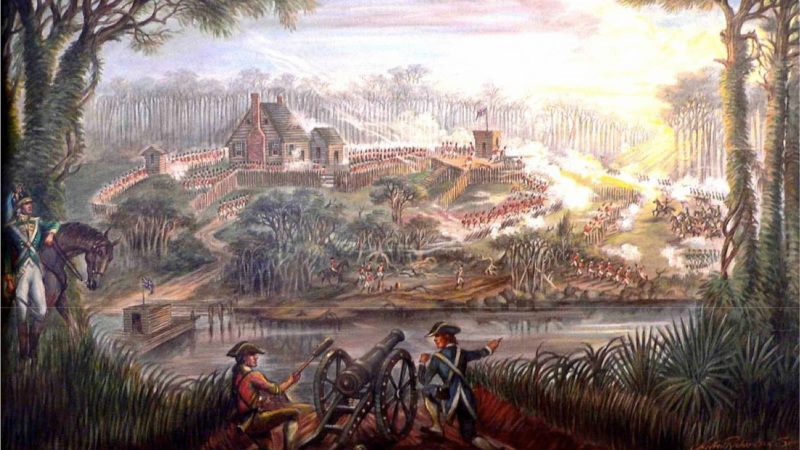 Traditionally, when the American Revolution is portrayed the focus is on other colonies with tales like Paul Revere’s ride, protests like the Boston Tea Party, and battles like the British surrender at Yorktown.  And, while those events and lore are important, the SC American Revolution Sestercentennial Commission (SC250) wants to inspire South Carolinians and tourists alike to celebrate South Carolina’s significant role in founding our new country. With over 400 battles and skirmishes, South Carolina has more American Revolution events than almost any state other than NJ. This means that there is a lot to celebrate in SC as America turns 250 years old. Yes, there will be fireworks on July 4, 2026, but there is plenty to get excited about during the entire Revolutionary War Era (1770-1783) in SC. Below are just a few American Revolution adventures right here in Lake Murray Country.

What’s in a name? Make your own free historic marker tour in Downtown Columbia. 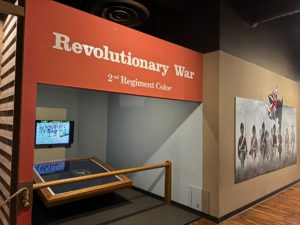 State Senator John Lewis Gervais moved from Charleston to the Ninety-Six district and felt that the state capitol should be centrally located. His bill was approved in March of 1786. As our state’s founding fathers began laying out the new capital city, they decided to pay homage to many of SC’s American Revolution patriots.

Of the 50+ American Revolution-related historic markers in Lake Murray Country, the majority of them are in Downtown Columbia. From our famous guerilla-style leaders Francis Marion (The Swamp Fox), Thomas Sumter (The Gamecock), and Andrew Pickens (The Wizard Owl), to Brigadier Generals like Stephen Bull and Isaac Huger many of the streets have Patriot ties. Have you ever turned onto Laurens St. not realizing that it was named for Lt. Col. John Laurens, now made famous by the musical Hamilton?

Use the marker map below to plot a stroll down Gervais or Main where you met our SC heroes. Plot the markers

Thomas Taylor, whose family gave their name to Taylor St., served in both the 1st and 2nd Provincial Congress and escorted George Washington into Columbia when he later visited in 1791. By the way, say hello to Washington & Lady Streets when you walk up Main.

Also on that welcoming committee and another street namesake is Wade Hampton I. You will find a lithograph of him at Historic Columbia’s Hampton-Preston mansion. Ask about their other beautiful house tours including a home designed by the architect of the Washington Monument Robert Mills and the home of Civil Rights advocate Modjeska Monteith Simkins.

Why is SC obsessed with Palmetto trees? Discover the answer and so much more at The State Museum. 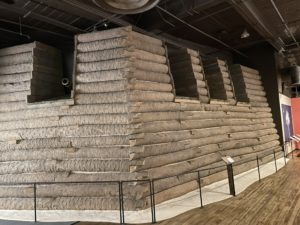 The week before the Declaration of Independence was signed, Patriots at what is now called Ft. Moultrie and Breach Inlet on Sullivan’s Island handed the British navy their first decisive defeat in the war. While there are many factors that played into this success, many honor the spongy nature of the Palmetto trees from which the fort was constructed. While the British ships made of oak would splinter, the Palmetto trees seemed to absorb the fire. At The State Museum, you will find a recreation of Ft. Moultrie and the story of SC’s state flag and seal inspired by that battle. Explore all of SC history at this fun, interactive museum. Have kids? Leave time for EdVenture Children’s Museum on the same property.

“For those interested in exploring South Carolina Revolutionary War history, the museum explores the conflict through displays and artifacts.

On display in the Revolutionary War gallery is the Verner Rifle, which belonged to John Verner, Jr. (1763-1853). He served in the militia at the Battles of Cowpens and Ninety-Six. In the recent acquisition gallery, This Just In, is a musket from the 71st Highland Regiment made up of Scottish volunteers who served in the British Army from 1776 to the end of the war in 1781. They arrived in South Carolina in 1779 and also fought at the battles of Ninety-Six and Cowpens. It is interesting to think that perhaps these weapons faced each other across the battlefield?

One of the most famous artifacts in the entire museum is the Fort Moultrie Flag. It was presented to the defenders of Fort Moultrie after their heroic victory of the British in July 1776.  Unfortunately, it is currently at the Smithsonian undergoing conservation to make sure it is safe for future generations. You can see a replica on display in the museum’s Revolutionary War gallery on the 4th floor.”

Also, look for a new traveling exhibit opening at the Native American Studies Center at the University of SC Lancaster in August – Resilience and Revolution: Native Americans in the 18th Century.

Did you know the Relic Room, located in the same building, has military history from all wars in which South Carolinians fought? They also host an American Revolution Day each spring.

What role could a teenage girl have in the American Revolution? Honor SC’s own teenage spy Emily Geiger at the Cayce Museum. 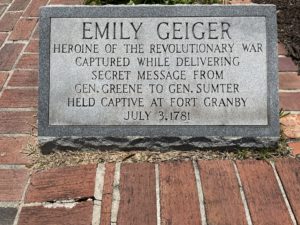 While it may sound like a Disney channel program, the story of Emily Geiger who delivered a secret message from General Nathanael Greene to General Thomas Sumter in 1781 is compelling. While she had ties to Newberry, Fairfield, and Lexington, her capture at Fort Granby is what is honored at the Cayce Museum. The lore goes that when the British went to find a Tory matron who could check her for messages, she memorized the message, ate it, and subsequently was released so she was able to deliver the message.

Another highlight of the Cayce Historical Museum is its extensive collection of indigenous artifacts. Many Native Americans joined the fight on both sides of the American Revolution.

Want to follow in the footsteps of our ancestors? Get outdoors where history and nature converge. 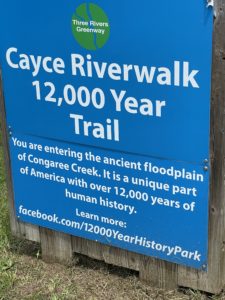 Connected to the Riverwalk along the west side of the Congaree River, the 12,000 Year History Park has been witness to 12,000 years of history from mammoths to Native Americans to Revolutionary history. When the British abandoned Fort Granby they retreated along what we refer to as the Old State Road. Learn about this and other American Revolution events such as Eggleston’s Capture and Rawdon’s Skirmish in the interpretive signs along the trail. A visitors center is coming soon. While the park and trails are free to access 24/7, visit their site for special events and regular tour information.

Another place to get outdoors is a state park that was donated by SC’s American Revolution 150th Anniversary Commission. The Civilian Conservation Corps (CCC), one of President Franklin D. Roosevelt’s New Deal Programs, developed the park. The park was the site of several Bicentennial events and now, 100 years from its opening, is still a great family outdoor adventure.

Known for its amazing nature, the Congaree National Park can also claim American Revolutionary War history. With the largest intact expanse of old-growth bottomland hardwood forest remaining in the southeastern US, exploring can truly feel like walking back in time. Stay tuned for special American Revolution events at the park coming in the near future.

How did families live in the 1700s? Stop in for a visit at the Lexington Museum.

The Revolutionary Era is more than just battles and skirmishes. Many of the Dutch Fork settlers just wanted to be left alone to take care of their families. The Lexington County Museum site hosts over 30 structures where there is a “story behind every door.” Three of the structures give you a glimpse at Dutch Fork life during the Revolutionary Era. Check out their Hands On History Programs and regular tour information on their website.

What does a Revolutionary War Era house have to do with the Alamo? Find out in Saluda, SC.

The Bonham House was built in Saluda, SC in 1780 and was owned by Sophie Smith Bonham. Her husband fought in the Revolutionary War. Her son, James Butler Bonham, would become one of Saluda’s famed sons who would die defending the Alamo. One of his brothers would go on to be a Civil War General and Governor of SC.  Call ahead to schedule a tour of this home and the Historical Society’s other Revolutionary Era home (the Marsh-Johnson House).

Leave plenty of time to visit the Museum on the square and check out the mural depicting the Saluda Old Town Treaty of 1755 where “Old Hop” and other chiefs of the Cherokee Nation gave up much of their SC lands west of the Broad River. SC militia and provincial officers gained military experience fighting against and alongside the Native Americans during what would be known as the Cherokee Wars. These skills would soon be used again.

What can stop the British in their tracks? Tea time, of course! 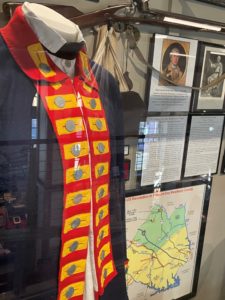 Lt. Col. Banastre Tarleton, who was known as a bloody fighter who often would not give quarter to those who surrendered. The story goes that the ladies of Newberry were able to get his dastardly Brit to act like a gentleman by offering him an outdoor tea. This civilized outing, of course, delayed British troop movements. Locals now call the rock formation where the event is presumed to have taken place as Tarleton’s Tea Tables. Learn about these American Revolution legends and more when you stop in at The Newberry Museum. Look for a tour of Tarleton’s adventures in Newberry coming soon.

What do these stories have to do with my family? Genealogy research assets can connect us all to history.

From the Treaty of DeWitt’s Corner to Thomas Sumter’s pension papers, the SC Archives & History Department has amazing assets and is open to the public Tuesday – Saturday. You can even sign onto Ancestry.com at the Archives. Thanks to links to the South Caroliniana Library and the National Archive, one can also discover amazing stories like Richland District’s Gideon Griffin, a free African American who saw action at important battles such as Monck’s Corner, Cowpens, and Eutaw Springs.

The Liberty Trail—developed through a partnership between the American Battlefield Trust and the South Carolina Battleground Trust—connects battlefields across South Carolina and tells the captivating and inspiring stories of this transformative chapter of American history. Download the Liberty Trail App or visit TheLibertyTrail.org for directions, stories, and more. Virtual Reality and additional locations are being added soon.

While many of the forgotten battlefields of SC are not yet visitable, look for many sites to come online in the near future. In the meantime discover a part of our nation’s history at historic landmarks across the Palmetto State.

Have a group? Always ask museums about special tours that can be arranged. From the Massacre at Cloud’s Creek to the current excavation at what is presumed to be the colonial town of Granby, there are so many powerful stories to tell right here in Lake Murray Country.

From SC? Find out how you can get involved at SouthCarolina250.com/get-involved. Visit America250.org for more on the national plans for the 250th.