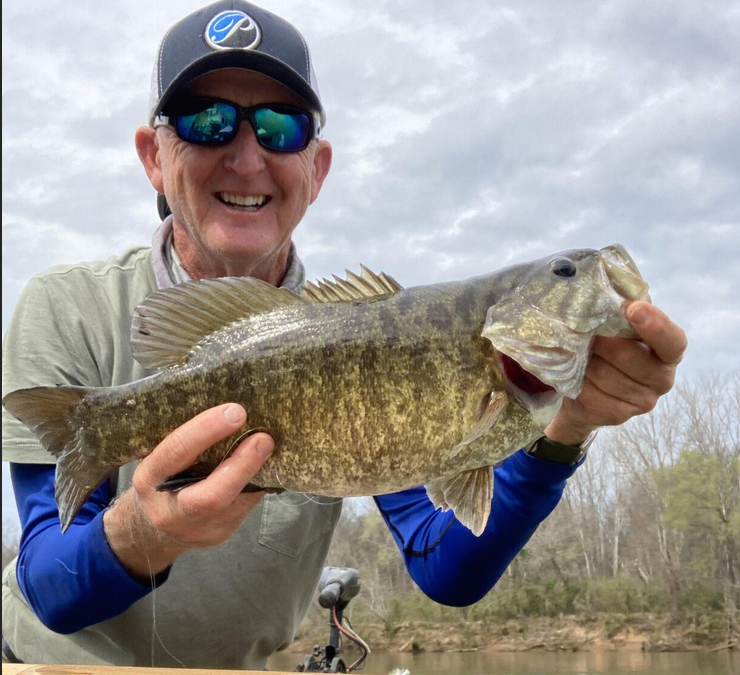 By: Tommy Braswell with The Post and Courier and published on Oct 2, 2021

South Carolina is known as one of the top states in the country for its largemouth bass fishing. But the largemouth bass has an overlooked cousin that also inhabits the waters of the Palmetto State.

Smallmouth bass are considered some of the toughest battlers and quite popular among freshwater anglers. They aren’t native to South Carolina, but state fisheries biologists began introducing them into upstate waters in the 1980s. Lake Jocassee, where the 9-pound, 7-ounce state record was caught in 2001, is probably the best-known smallmouth fishery in South Carolina. But the Broad River above Columbia is another popular place for anglers to target smallmouth.

Once he learned of the Broad River smallmouths and sampled the fishery, former Charleston resident Mike McSwain became so enamored with the fish that he moved to the area and now guides for smallmouth from an Old Town canoe.

McSwain said smallmouth can be found all along the Broad River, which has its beginnings in North Carolina and eventually joins the Saluda near Columbia. He said one reason the fishery is so good on the lower Broad River is that there aren’t many public access points, which means you really have to work to fish that section.

“Fall is an unbelievable time. When they get fired up to start feeding for colder weather coming, they school up more in the fall. Fall is the time of year when we get a good bite. We’re going to work that area pretty hard before we leave it,” he said, adding that fall is a good time to catch those 4- to 6-pound smallmouths.

“We see a lot of schooling fish flaring up and swimming around with a fish that you have on the hook, sometimes 4 or 5 other fish right there with the fish that’s being caught. That’s one of the things that makes fall so cool for us is that the big fish tend to group up.”

McSwain said in the fall he’s caught two fish on the same lure, with the second fish attacking the other fish’s mouth to try and get that lure.

“If we get a big fish on in the fall, and if I’m the one that gets the fish, I’ll have my client throw in right past me. Since that’s the time of year when they tend to school up, that’s when we tend to get more double hookups. The smallies are fired up when they see that fish being caught.”

McSwain said one of his memorable trips was with Pure Fishing executive Brad Rutherford and a couple of his engineers who design fishing tackle.

“We had four of us and we all seemed to double up a lot. We’d go an hour without a bite and all of a sudden we’d have two 4-pounders on. Fall is that time of year that when someone gets a fish on you want to throw another lure out there and light up that pool.”

McSwain said in fall he likes to fish big baits – big swim baits and big jigs. He said lures that imitate crawfish are good because crawfish, while active in the river year-round, are more active when the water starts cooling. McSwain said he also uses some big topwater lures as well such as a Whopper Plopper.

“We’re targeting 4- and 5-pound fish. It’s kind of like fishing for muskies. You’re not going to get as many bites on a 5- or 6-inch swim bait, but that’s what we throw a lot more of in the fall targeting big fish,” McSwain said. “Compare that to the 2- or 3-inch swim bait you fish in the summer. In a nutshell, we’re beefing up our size.”

“We are still keying on oxygenated areas, the same places you would fish in summer and spring. The water hasn’t cooled off so much that these fish are looking for deep pools. They’re still active. Our water temperature isn’t going to get too cold for these fish until January, usually,” McSwain said.

“They’re going to be concentrated in oxygenated areas where there’s flow, current and ambush points, the same shoals I fish the rest of the year. I’m not in waders in the river until well in October. The water is slow to cool which makes the fall bite a long one on this river, as long as we don’t have tropical storms screw it up. It’s big fish time and it’s also a great topwater time.”