Travelers know that the locals often have the best inside information on the region. They’ve found the best restaurants, things to do and places to go. In this series of blog posts we introduce you to locals from Lake Murray Country who have relocated, started businesses or just love the region and want to share their knowledge with visitors! Meet these amazing locals and make sure to say hi, when you see them around!

Tell us about yourself, who is Steve Fisher? 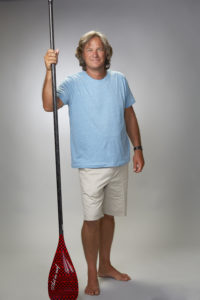 I am a recently retired high school teacher (Dutch Fork High School).  I moved to Irmo, SC in 2004 from California, where I had lived all my life and taught school for 19 years.  I started teaching at Dutch Fork High School that year.  Very quickly, it became apparent that I would have to secure some other form of income to make a living here in South Carolina (in California, school teachers earn a living wage!).  So, I began looking into side gigs.  After trying out a few side jobs and one other attempt to start a business, I began to focus on what I knew: working with kids and surfing.  Although there is no surf in Lake Murray, a new sport was just then developing, standup paddleboarding (SUP).  So, in 2010, I launched California Republic Standup Paddleboards.

When did you start Stand up Paddleboarding?

When I moved here in 2004, I brought with me a prone paddleboard.  Prone paddleboarding is a sport that goes back to the 1930s in California.  Standup paddleboarding had not yet begun, but a small cadre of watermen were prone paddleboarding in California, Hawaii, Australia, and New Zealand.  I paddled by myself on the lake regularly.  I never went out without someone asking me all sorts of questions about the board.  It was 18′ long, 19″ wide, had a tiller and rudder, and no paddles.  The conversation was always the same:  “What kind of kayak is that?”   I would explain it to them.  “Well, where is the paddle?”  “There is no paddle, just my arms.” And so it went.  I flirted then with the idea of starting a community on Lake Murray for this activity, but didn’t see the economic viability of it.  Then, in about 2007, Hawaiians began experimenting with large surfboards and would use paddles to propel them with the surf was down.  A new sport was born!  In this, I could see the economic potential in this because of its relatively inexpensive entry, and its ease of use.  In 2010, very few in South Carolina knew what this was, each successive year brought more and more awareness.  I opened my shop in Irmo on August 1, 2010.  In retrospect, I didn’t need a shop.  On the sign, I referred to it as “Lake Murray’s Boardshop.”  I sold paddleboards and skateboards, and apparel.  I had high hopes!  But, the shop never once turned a profit in any of the three years it was open.  However, paddleboard rentals and summer paddle camps for kids were quite brisk.  During the summer months, I barely sat down!  So, in 2013, I closed the shop and focused on doing business on the lake out of the back of my trailer.  Times were good!

What brought you to South Carolina?

Tell us why you love Lake Murray? 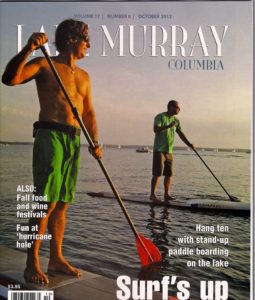 I now live in a small “barndominium” in Chapin, just 4 miles from Dreher Island State Park.  In the fall and winter months, I paddle around Dreher Island every day, usually by myself.  There are many moods to the lake.  Sometimes, it is dark and angry, others peaceful and with unparalleled beauty.  In the summer months, I drive around the lake almost every day with my business.  I am never far from the lake.   During the summer when I do my summer paddle camps, I am in and out of the water approximately 25 times per day.  I can never get enough of Lake Murray!  We are blessed to have such a magnificent resource at our doorstep.  I still have difficulty believing that a regular guy like me can have such close access to the lake.  It means everything to me!

Do you have a fun story you can share?

The lake has been such a big part of my life, it is difficult to narrow down to one story.  But, this one seems like the best.  In the early days of my business, I was one of the founding members of the Lake Murray Paddle Club.  A small group of us formed this club as an outlet for all the other people on the lake with an interest in paddling.  Soon, we were going all over the South to paddleboard races and meeting others with similar pursuits.  I made many friends and lived a lifestyle similar to the one that I had given up in California to come here.  When I first moved here, I felt like a fish out of water and out of my element.  But, when these other oddballs (I use that term with great affection!) started to come into my life, I realized that I had found my tribe and began to feel comfortable in my new home.

We hear your nickname is “Moondoggie.” Is there a story behind it?

For the majority of my life, I have been a surfer.  When I was younger, I centered my life around surfing.  When I took a summer job in Malibu, California in the early 1980s as a surfing instructor, I was given the name Moondoggie, after a fictional character in the Gidget books and movies.  It has been quite a while since those movies, so fewer and fewer get the reference, but it is a surfing name.  I prefer for kids to call me that at the summer camps, rather than “Mr. Steve.”  Now, many adults call me Moondoggie as well.  I’ll take it!

Interested in booking a California Republic Stand Up Paddleboard adventure?

Come give it a try! California Republic SUP specializes in instruction, sales, rentals, summer camps, fitness and SUP events from March to October. With the flexibility of a mobile office, aka “The Rolling Trailer of Paddleboard Fun” owner/operator Steve Fisher has been rolling around Lake Murray since 2010 bringing fresh water fun to locals and visitors alike.With a main location set at Southshore Marina in Leesville, SC, California Republic SUP is committed to putting their clients on quality equipment that suits their needs and ability to ensure a positive experience on the water.  Learn More …and tell em’ Moondoggie sent ya!