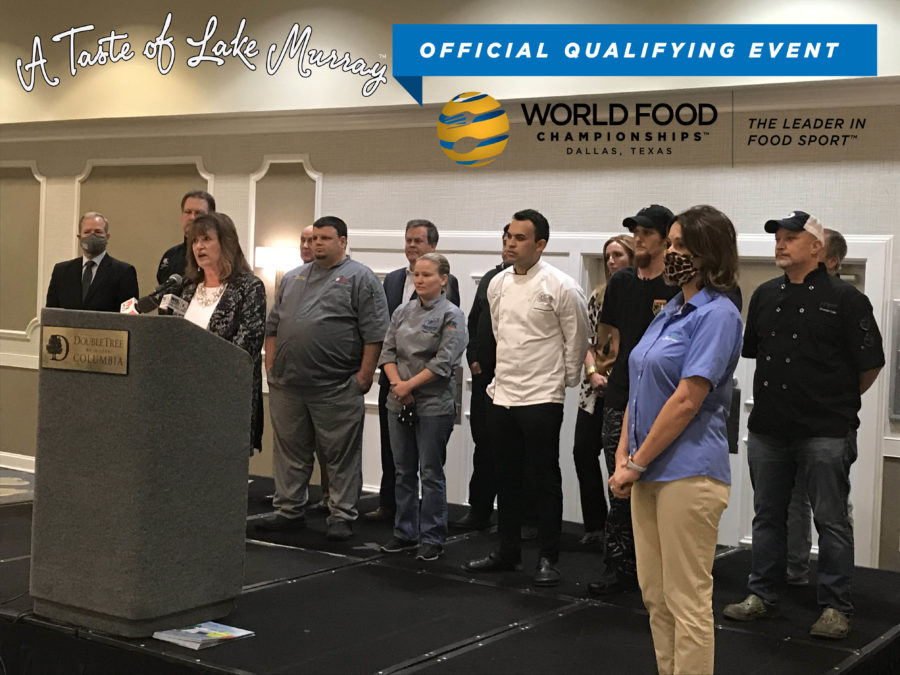 COLUMBIA, SC – The World Food Championships (WFC) just announced a new partnership with the Capital City/Lake Murray Country Regional Tourism Board (RTB), South Carolina to host a Super Regional qualifying event on March 4, 2021. Through the charitable event called “Taste of Lake Murray,” local chefs will be invited to compete for six Golden Tickets and the chance to represent the first-ever Team Lake Murray Country at the 2021 WFC next fall.

“Lake Murray Country makes up parts of metropolitan Columbia, historic Newberry, rural Saluda and the County of Lexington, which is one of the most vibrant and fastest-growing counties in South Carolina, states Miriam Atria, President/CEO of Capital City/Lake Murray Country. This area continues to experience growth in the culinary scene and our regional tourism board wants to encourage and promote our food scene on a national scale through this partnership with WFC. This event will allow us to focus and showcase our regional restaurants/chefs, who have suffered during this pandemic.”

The “Taste of Lake Murray” event will be an intense culinary battle for local cooks and restaurants to claim their spot on the newest WFC Regional team. The event will be hosted at the DoubleTree by Hilton in Columbia, SC, where more than 20 chefs are expected to create samples for the event’s 800 patrons. The categories that will be up for grabs through the WFC Golden Ticket process are Bacon, Barbecue, Burger, Chef, Dessert, Recipe, Sandwich, Seafood, Soup and Steak. Thanks to WFC’s growing state and regional partnerships, the development of competitive teams from a strategic area has continued to grow. This latest team addition for South Carolina will join a robust and experienced group of teams from Alabama, Missouri, Texas, Tennessee, Maryland and Indiana, where the previous Final Table event was held and Lidia Haddadian was named the 8th World Food Champion.

only highlight the great local cuisine from America’s diverse regions, but they end up

giving new groups of chefs and cooks a chance to develop life-long friends at WFC that share the same passion and purpose of food through competition.”

The World Food Championships (WFC) is the highest stakes food competition in the world. This multi-day, live event culinary competition showcases some of the world’s best cooks who compete for food, fame and fortune in 10 categories. In 2019, more than 450 culinary teams from 11 countries and 42 American states competed in WFC’s Main Event. In August, the 10 Category Champs faced-off in the $100,000 challenge that determined a new World Food Champion at The Final Table: Indianapolis.

About Taste of Lake Murray